The Bestselling MC Series is now available in a four book box set. You can download for free with KindleUnlimited. 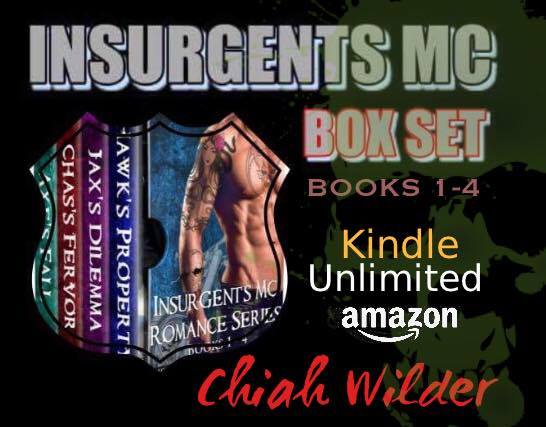 From the first time Hawk saw her, he knew he wanted to do dirty things to her in his bed.

Hawk, the muscled, tatted, badass Vice President of the Insurgents Motorcycle Club, sees women as bed warmers, nothing more. He never stays with the same woman, and although there are plenty of women who want to be his old lady, he wants none of that.

He doesn’t let chicks ride on the back of his bike.

He doesn’t fall in love.

And that suits him just fine until he meets her whose eyes light a fire in him. Problem is she’s not so easy to get into his bed. Hawk wants her. And when Hawk wants something he takes it.

Cara Minelli doesn’t want to go to the biker bar, but her friend talks her into it.

Swearing off men since she caught her fiancé cheating on her right before her wedding, she has buried herself in her career not wanting a man in her life. Until she sees him. He is sexy, rough, crude, and oh so very wrong for her. So why can’t she stop thinking of all the nasty things he’ll do to her if she relents and lets him in her bed?

Then a vicious killer who has been strangling women in the area focuses on Cara. Police think bikers are involved. Can Cara set aside her trust issues and let Hawk into her life?

Hawk sees it as his job to protect what is his…and Cara is very much his even if she doesn’t know it yet. Cara keeps her heart guarded, but when danger comes calling, their lives collide. Hawk will stop at nothing to keep Cara safe and make her “Property of Hawk”.

The Insurgents MC series are standalone romance novels. Hawk’s Property is Book One in the series. This book contains violence, strong language, and steamy/graphic sexual scenes. HEA. No cliffhangers. The book is intended for readers over the age of 18.

. Raised in the outlaw biker world, Jax has bedded more women than he can count. The only things on his mind are big ass Harleys, scorching whiskey, and pretty women who can spread on command.

Then he meets Cherri—the stripper with ice blue eyes and white-blonde hair.

He wants her in his bed.

She would rather not.

Cherri has complicated stamped all over her. Jax doesn’t need a woman like her messing up his life.

Too bad he can’t stop thinking about her.

Cherri ran away from a bad situation back home.

She has secrets she hasn’t shared with anyone. Stripping is her means of making enough money to start a new life, and nothing’s going to screw up her plans.

Then she meets Jax.

He’s gorgeous, sexy, and a cocky bastard. His tattooed, ripped chest and biceps make her drool. She knows she should run far away from him, but her body wants him in the worst way.

Just as she begins to relax, her past collides with her new life. Cherri must navigate a deadly obstacle course littered with outlaw motorcycle clubs and a power-hungry politician.

Jax won’t stop until he claims Cherri. He vows to protect and love Cherri no matter what. When put to the test, will Jax betray his family—the Insurgents MC, or will he lose the woman he loves forever?

The first time Chas saw his son’s teacher, he wanted her in his bed. Now.

Chas, the hardened, tattooed member of the Insurgents Motorcycle Club, has sworn off women since his divorce left him bitter and jaded. The last thing he wants to do is settle down with another old lady.

His relationships now are easy and free—exactly the way he likes it.

Until he meets curvaceous Addie. The sexy redhead whose eyes set him on fire.

He has to have her between his sheets.

And he knows she wants him. Eyes don’t lie.

Addie O’Leary has lusted after her student’s dad ever since she saw him.

She has guarded her heart and her life for the last two years. Now Chas, the tattooed, dirty-mouthed, rugged outlaw biker threatens to tear down all her barriers.

Always loving the bad boy, Chas is a dangerous badass with an attitude and an outlaw MC. His charming smile pulls at Addie’s heart and his chiseled chest makes her body overheat.

Carrying around a deep, dark secret, Addie is afraid her past will destroy her future. Chas seems to be her only hope for redemption. Will he be able to intervene before it’s too late?

Chas knows Addie is hiding something. He makes it his mission to find out what it is, and, once he does, he’ll claim her as his woman.

The Insurgents MC series are standalone romance novels. Chas’s Fervor is Book Three in the series. This book contains violence, strong language, and steamy/graphic sexual scenes. HEA. No cliffhangers. The book is intended for readers over the age of 18.

The first time Axe saw her at his friend’s wedding, he knew she’d have her long legs wrapped around his waist, moaning and begging for more.

A member of the Insurgents Motorcycle Club, Axe has the tattoos, the ripped body, and the badass attitude.  He’s great in bed and always leaves women pleading for more. But…

Don’t ask him to commit.

Don’t ask for a phone call.

That’s the way he rolls….

Until he meets her.

It was a one-night stand.

He was gone before she woke up.

Except he can’t stop thinking about her.

Baylee Peters has thrown herself obsessively into her career vying for the brass ring of partnership at one of the most prestigious architecture firms in Denver.

Not wanting any distractions, she has shelved romance. Nothing can stand in her way.

Until she meets him.

The dark-haired man with the smoldering eyes and tatted, chiseled body who makes her insides melt.

It was just for one night. So what if the sex was incredible?

Then work takes her to Pinewood Springs. And to him. Her ordered world explodes.

As if she didn’t have enough trouble with a sexy, bad boy biker whom she can’t stop drooling over, her memory of the night her mother was murdered is coming back, and the killer is waiting to make sure no one knows what she remembers.

Can Baylee trust Axe enough to let him into her life and take control? Can he save her before a determined killer takes away Axe’s one chance at happiness?

Axe vows to protect her, and he will stop at nothing until he makes her his woman.

The Insurgents MC series are standalone romance novels. This is Axe and Baylee’s love story. This book contains violence, strong language, and steamy/graphic sexual scenes. It describes the life and actions of an outlaw motorcycle club. HEA. No cliffhangers! The book is intended for readers over the age of 18

OTHER BOOKS IN THE SERIES

KU users please remember NOT to use the flip page feature when reading on your devices.

Page flip is a navigational tool and using it for navigation does not count toward pages read by design. You can turn off your page flip by going to your settings on your devices.

Thank you for supporting Indie Authors.

Chiah Wilder is the author of the successful Insurgents MC series.

Chiah’s love of bad boys has inspired her Insurgents series. She loves an alpha male whose softer side is brought out by a passionate, spirited woman. Steamy, biker romances with rough, sexy bad boys are her guilty pleasure along with brownies, cheddar cheese, and movie marathons.

She is busy writing her next book in the series.

Chiah would love to hear from you. You can contact her at: chiahwilder@gmail.com

Join the Chiah Wilder Newsletter to get the scoop on new releases, previews, free short stories, and a whole lot of other exciting goodies: http://eepurl.com/bACCL1