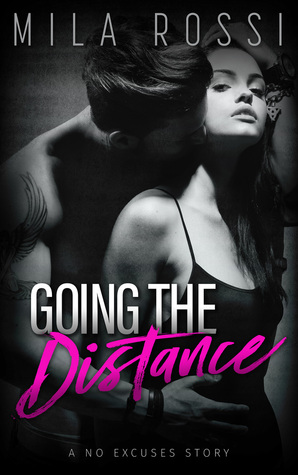 Going the Distance (No Excuses #1)
by Mila Rossi
4 Stars

really liked it
Sam (Samantha) Wellington is having a girls weekend when a stranger attempts to pick her up. He just won’t take no for an answer and ends up being a super big jerk and she ends up slapping him. Woman across the world were cheering her on.

After returns to work only to discover she’s been assigned to interview Trent “The Punisher” Page. The Punisher has never allowed an interview before. The fact that Sam slapped him on their first meeting is going to make her accomplishing her assignment much harder to complete.

Trent doesn’t give in easily and makes Sam really jump through some hoops in her attempts to get her interview. I think Sam took the right approach with Trent. Show him things he didn’t have in his life. Basically get to know the ‘real’ Trent and not the ‘The Punisher’.

I love the byplay these two have. As the story goes along you can tell that Trent is really listening to Sam and becomes a better person because of her.

I really like how Mila protrayed ‘The Punisher’. It was ‘real’. He is a conceited ‘I’m on top of the world’ jerk. Which I can see a famous boxer having this persona.