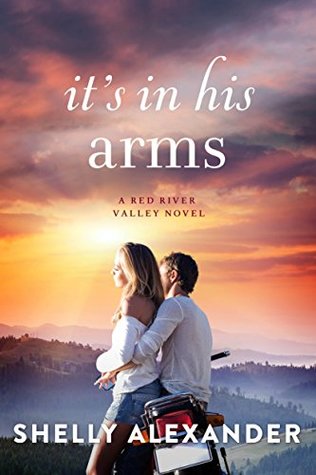 Lorenda Lawson has built a safe, sheltered life for her two young sons since their father was KIA several years ago. She has a beautiful cottage and a support network of family and friends. No one in Red River suspects that her marriage to Cam was ever less than perfect. Nobody, that is, except the gorgeous ex-SEAL who’s shown up after a long absence: Cam’s notorious twin brother, Mitchell.

Mitchell Lawson was a teenage rebel who fled Red River after the local watering hole burned down, choosing the military over jail. Now he has a new mission: making amends with the town and his sheriff father for his hell-raising days, while resisting the woman he’s always wanted. Between Lorenda’s warmth and sensuality and her boys’ mischievous matchmaking ploys, it won’t be easy.

When a string of fires breaks out, suspicious eyes turn toward Mitchell. Lorenda risks her reputation for his sake—but she’ll need to risk her heart, too, to bring this onetime bad boy home for good. New to the series? Get caught up with books 1-3

It’s In His Heart (A Red River Valley Novel Book1 )

Ella Dennings is furious. Soaking wet, muddy, and furious. All she wants is to enjoy a quiet summer retreat in her Red River Valley cabin. Maybe she can finish healing after the death of her husband, Bradley. Maybe she can even finish writing that third book in her anonymously written bestselling series. But when she arrives at the cabin in a raging rainstorm, who does she find holed up there but Cooper Wells, Bradley’s sexy best friend—a man capable of seducing women within seconds—and a man Ella has never liked.

Coop’s got his own baggage. He’s engulfed in a nasty legal battle, and after selling his home to cover his legal fees, he’s got nowhere to go but the cabin. He and Ella will just have to coexist under one roof…but is their heated animosity boiling over into attraction? And when Ella’s racy new book rocks the sleepy town, will her secret identity spell scandal for both of them?

There’s nothing that Angelique Barbetta can’t handle, no illness she can’t recover from, not one item on her outrageous bucket list that she can’t conquer—not even alligator wrestling! But after discovering her fiancé in a less-than-professional position with their perky assistant, even tough-as-nails Angelique needs a break. Her law firm sends her to Red River to work on a case that should be a piece of cake. Until she meets her sexy neighbor Blake Holloway…one of the proprietors who will lose everything if Angelique wins.

On opposite sides of a hostile legal battle—with a pair of Angelique’s silk undies ending up in Blake’s hands—undeniable chemistry swirls between them. As Blake shows Angelique just what Red River has to offer, her heart begins to melt for the people whose businesses make up the soul of the town. Can she put aside her feelings to win the case? Or will he convince her there’s much more at stake than winning—like love?

Miranda Cruz isn’t just the best darned waitress in town anymore; she’s Red River’s newest innkeeper. But first, she has to find the contractor who’s disappeared with her life savings so she can start renovations. Not so easy for a woman who never depends on anyone, especially a man. And when a gorgeous old flame shows up, the fire between them is reignited and threatens to send her dreams up in smoke.

Acclaimed environmental architect Talmadge Oaks returns home to Red River on family business. He plans to get in and get out quickly because a professional catastrophe is waiting back in Washington. When an unforeseen snag keeps him in Red River longer than expected, he finds himself entangled in the renovations of his late grandmother’s Victorian inn. Handy with a hammer, he offers to help the beautiful new owner, but his motives aren’t completely selfless. Will his secret demolish everything they are building? Or can their undeniable passion keep them together?

There’s just one little catch. Sometimes women go looking in the wrong places. Sometimes they need a little help figuring out what they want in a man. That’s where I come in. I’ve spent years studying what women want. I mean what they really want.

Sounds like a great job for a guy, right? A dream career. Especially since it’s become so much more. It’s a multimillion-dollar corporation called Checkmate Inc., and I’m the CEO. One of the youngest on record. Except a few feminist groups have gotten the wrong impression and are starting to make noise. Something about how Checkmate helps give guys an unfair advantage over women. And the one woman who can help me can also sink my company to the bottom of the Hudson—and drag me along with it.

Shelly Alexander is the author of contemporary romances that are sometimes sweet, sometimes sizzling, and always sassy. A 2014 Golden Heart® finalist, she grew up traveling the world, earned a bachelor’s degree in marketing, and worked in the business world for twenty-five years. With four older brothers, she watched every Star Trek episode ever made, joined the softball team instead of ballet class, and played with G.I. Joes while the Barbie Corvette stayed tucked in the closet. When she had three sons of her own, she decided to escape her male-dominated world by reading romance novels and has been hooked ever since. Now, she spends her days writing steamy contemporary romances while tending to a miniature schnauzer named Omer, a tiny toy poodle named Mozart, and a pet boa named Zeus.

Invite your friends for a chance to win $50. Grand Prize Giveaway, Kindle Fire.

Check it out HERE:

Enter to win one of the following prizes: