An Early Spring by Ann Lister
My rating: 4 of 5 stars
REVIEWED BY Tina Shobe
Colby is on a mandatory work retreat in the mountains in Colorado. She doesn’t want to be there and is making everyone miserable with her attitude. She is faced with a situation that makes her so mad that she stomps off outside on her own.

In the meantime a winter storm is moving in and all the cabins are being evacuated. Colby is nowhere to be seen.
Nick, who works with the Search and Rescue Team for the Colorado Sun Ridge Ski Resort stays behind to find Colby. It’s too late to evacuate once she is found. They stay in the cabin waiting out the storm. Being confined in close quarters makes attractions build. Those two have some serious heat.

I don’t know if I could be as nice as Nick was to Colby with her attitude but he could see beyond her prickliness to the person she really is. He made her open up. That just shows what a wonderful person Nick is. Personally, she was grating on my nerves.

They are separated due to no fault of their own after they get back to reality. They both end up thinking the other one didn’t feel the same.

After their time together Colby re-evaluates her life and makes changes so she can be ‘happy’ in life. One of those changes is taking a short term job at the same Ski Resort that Nick works through.

They finally meet up again and get past all the misgivings and move on towards the future.

A bad accident has them both realizing how much they do mean to each other.

The one thing that really confused me about this book is why were those trinkets left on Wayne’s headstone? I keep thinking about that and wondering if there’s more to this story.

View all my reviews 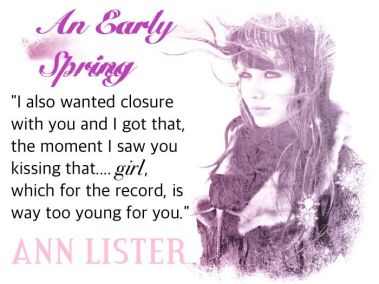