The Visitors Of Orange by Author Gerard Labrecque is a daring story of love, loneliness and fighting the darkness together – whatever the cost.

The Visitors Of Orange 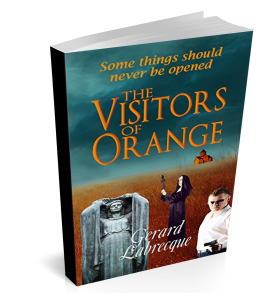 “There are two types of darkness in this town. If you’re not one, you’re the other.”

Twenty years ago, Senior Airman Nate Barrows saw something. Something new and alien, flying through American airspace. Now the military has forced Nate to investigate decades-old UFO sightings in a dead-end office in the unassuming town of Orange, Massachusetts, or face a dishonorable discharge. Things turn around for Nate when he meets a vivacious young woman to share his life with. But as they plan their future together, clues from their past make Callie and Nate realize perhaps their meeting was not an act of destiny, but orchestrated by the government to deal with Orange’s most dangerous secrets. Can their love survive a government conspiracy? Why do old folks keep disappearing? And what’s behind the second bedroom door? Agent Nate Barrows is on the case!

The Visitors Of Orange Trailer

Gerry Labrecque was born in Northern RI to a family of 13. He has four children, and 6 grand children
His first book, The Wizard Lizard, was inspired by a bedtime story he told his youngest daughter when she was sick. This bedtime story, born out of love, inspired him to pursue his writing in a more serious fashion.

Gerry’s second book, Random Glory (2011) is his first foray into the world of farce and fantasy, telling the tale of the Son of Frankenstein’s Monster, and his journey to find love in a world where everyone wants to follow him with torches and pitchforks.

Lorelei and the King’s Monster – The Wizard Lizard, Book II (2013) is a follow up on the adventures of Lawrence the Lizard. Lawrence continues to spread the magic of kindness throughout the kingdom.

The Crack of Dawn (2013) is a fast-paced, action/adventure thriller that follows Stanley Evans, a retired Navy Seal and veteran truck driver, as he leads the resistance against aliens, and tries to save the world.

The Adventure of the Wizard Pigs (2015) is the third installment in the Wizard Lizard series, following Lawrence as he lends his courage, wit, and kindness to his friend who is having a hard time making friends at school.