For All The Right Reasons Book Cover Revamp

Parental Discretion is Advised. Sydney Willows, a professional photographer boasts a long list of world famous musicians as clients. She’s blond, ambitious, and about to shoot the most lucrative job of her career when she meets Ben Gallo, lead singer and guitarist for his band, Reckless. Tall, handsome, and with enough rock swagger to melt any woman’s heart, Ben plays to win. Will he be the one to show her that the path to ‘happily-ever-after’ is possible with a music man, or will a juvenile bet made between brothers prove stronger than a bond of love? For All The Right Reasons is ribboned with deception, lust and love and will leave you aching for an encore.

Add to your TBR shelf on Goodreads

Beat Of His Own Drums, Band of Brothers Novella

For All The Right Reasons introduced Ben and Simon Gallo, the two brothers who together created what would become the legendary rock band Reckless. For every step towards glory which Ben took on their rise to fame, Simon’s footsteps faltered along that same journey. Nothing he did seemed to measure up and it was one misstep after another, until Simon no longer knew the man he was looking at in the mirror. Substance abuse covered up his anger and far too many poor decisions to count concealed what he really wanted in his life: acceptance and self-love along with a meaningful and committed relationship with a soul mate.

Beat Of His Own Drums is Simon’s story, and gives insight to who Simon really is as a man and why he did the things he did to try and find his happiness. Everyone deserves a second chance at life and even at love, and Simon is ready for his. He’s walked the walk and talked the talk, now Simon wants the world to know why he’s always had to go through life using the beat from his own drums to guide him.

This 30,000 word M/M novella has an HEA ending, and is a follow-up story to For All The Right Reasons, M/F, which I would recommend reading first. These stories have now become a series, and a full-length novel will follow Beat Of His Own Drums, which will release in early 2018, continuing Simon and Ben’s story.

Add Beat Of his Own Drums to your TBR shelf on Goodreads. 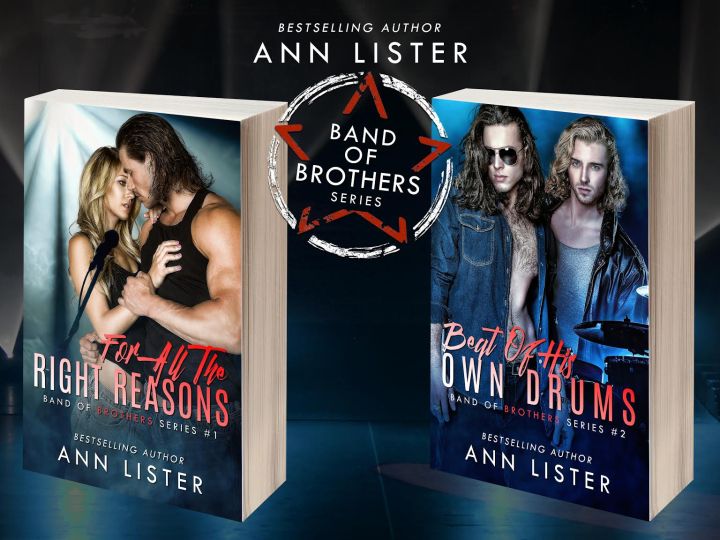 Author Ann Lister has some exciting things to come over the next few months. She may not always have time to create sign up forms to invite you all to join and help share. If you don’t want to miss a thing by this Author please sign up to join her master list.